Pirin - The Transition of the peaks

Sandanski
…is a town in southwestern Bulgaria. The Roman settlement of this place was called Dezudava and Slavs, who came after the Byzantines called it Saint Vrach. In the region of Sandanski is believed that Spartacus from the Thracian tribe Medi, was born and lived here. The monument of Spartak is a symbol of the city. Sandanski is situated in Blagoevgrad district and is near the town of Melnik. The town, situated at an altitude of 240-300 meters, is the warmest Bulgarian city in all seasons. The air in Sandanski is with the lowest content of allergens in Bulgaria and is suitable for the treatment of asthma, allergic and other diseases. The city is famous as natural clinic and spa.
Accommodation in Sandanski 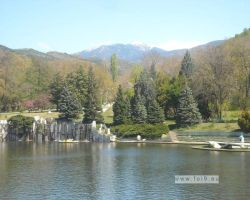 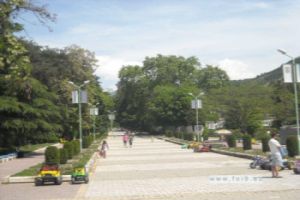 Popina Luka waterfall
Popina Luka is a beautiful region and a mountain climatic resort in Northern Pirin. Located in about 18 kilometers northeast of the town Sandanski, in about 1250 meters altitude.
Here is the famous Popina Luka waterfall, which was declared for a natural landmark. In this area were built many private villas, most of them are rented. In Popina Luka region is the hut Yane Sandanski.
Popina Luka is located surrounded by pine forests, mixed with some deciduous species. The settlement is a starting point for many tourist routes. 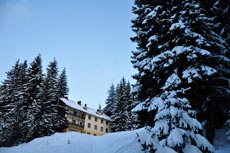 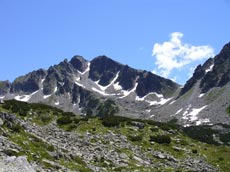 Hut Begovitsa
The hut Begovitsa (Kamenitca) is located in the northern part of Pirin Mountain. Located at an altitude of 1750 meters, on the border of the forest zone, on the left side of the river Begovitsa. It is a massive three-storey building with an attic floor. The capacity of the chalet is 90 beds. Available is accommodation in common bedrooms and one apartment, it has a parking. Camping places are marked. The hut has water and electricity, has a fully equipped kitchen and dining room, in the first floor is the restaurant. The region has a sports ground and ski slopes with three ski lifts. 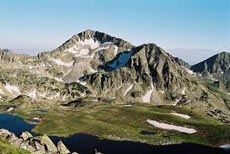 Peak Kamenitsa
Peak Kamenitsa is the fifth highest peak in the Pirin Mountain whit his 2822 meters high. From the west it is separated with short ridge, ending with the little peak “Kamenishka Kukla” (2690 m) and slightly to the south separates the long Begovishki ridge, which separates the valleys of rivers Begovitsa and Mozgovitsa. Exactly whit peak “Kamenishka Kukla”, Kamenitsa acquires its character and very popular form, viewed from the lake Tevnoto. From the north it is rocky and wide with sharp needlepoint, and under the rocks there is a large field of moraines. That’s why is named Kamenitsa. On the northern wall is climbing tour of category II "b". From south is rocky, but more petit and not so impressive. To the top can be reached from Tevno Lake and huts Begovitsa and Pirin. Through it do not pass tourist routes, but who climb it, will not regret, because the top reveals a remarkable view. 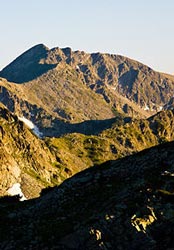 Peak Kuklite
Kuklite is a peak in Kamenitsa share of northern Pirin. Its altitude is 2686 meters. It rises southwest of the peak “Zabat” and north of peak “Golena”. The peak is with inaccessible rocky slopes in west and northwest to the Begovishki cirque, in their foot has large moraine field, sometimes densely overgrown with dwarf pine. It is built of granite. In the northern foot is situated the beautiful Begovishko or Kuklensko lake. 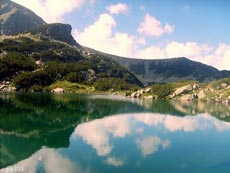 Kuklensko Lake
In the heart of the top, from the cirque Bashmandra side, there are several springs, which together with the springs around the peak “Zabat”, gives rise to the Sredna (Bashmandrenska) River. 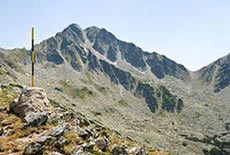 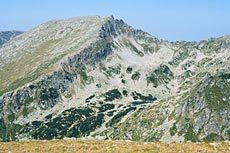 Peak Yalovarnika
… is 2765m. high. It is situated in the alpine northern Pirin share of Kamenitsa lateral ridge. Yalovarnika is a massive granite peak. Viewed from Mozgovishka gate, its typical two peaks stand out among the other two giants of the Kamenitsa ridge – the peaks Kamenitsa and Kukli (The Dolls). The northwestern slopes of Yalovarnika are opened to the stony Begovishki cirque and have a typical alpine view. They are almost vertical, very choppy and eroded, with vast waterless rock falls at the base of the peak.

Peak “Zabat”
… is a peak in the northern part of Pirin mountain, with a height of 2688 meters. It is built of granite. It is situated in the central parts of lateral Kamenitsa ridge. It name has been recently given, and is traditionally seen as part of the array of Kuklite. To the north and northwest of the top extends the stony Begovishki cirque. His slopes in this direction are sharp and rocky. Below them is large stone sea. At south from the peak are spread over the lush meadows of Bashmandra cirque. The peak is easily accessible. Convenient starting points for his climbing are huts Pirin, Begovitsa and Tevno Lake. From hut Pirin the path passes through Bashmandra cirque, the peak can be climbed through any of his two saddles. From hut Begovitsa the path passes through the Begovishko Lake and the saddle between the Zabat and Kuklite.